How to Use Mr. Rogers’ Tools for Learning to Inspire the 47% of Disengaged Students

Fred Rogers of the beloved Mister Rogers’ Neighborhood television program supported student emotional well-being and the “tools for learning”. Similarly, parents want their children to develop strong social and soft skills as much as study academics.

In this presentation, TSI is joined by authors Ryan Rydzewski and Gregg Behr on how schools can lean on the teachings of Mr. Rogers to support the whole student effectively.

Could your school community benefit from education & resources addressing well-being, social media use, or related topics?

Watch this webinar to learn: Gregg Behr is a father, children’s advocate, and director for the Grable Foundation whose work is inspired by his hero, Fred Rogers. For more than a decade, he has helped lead Remake Learning—a network of educators, scientists, artists, and makers he founded in 2007—to international renown. Formed in Rogers’ real-life neighborhood of Pittsburgh, Remake Learning has turned heads everywhere from Forbes to the World Economic Forum for its efforts to ignite children’s curiosity, encourage creativity, and foster justice and belonging in schools, libraries, museums, and more. A graduate of the University of Notre Dame and also Duke University, Gregg holds honorary degrees from Carlow University and Saint Vincent College. He’s an advisor to the Brookings Institution and the Fred Rogers Center, and has been cited by Barack Obama, Richard Branson, and the Disruptor Foundation as an innovator and thought leader. 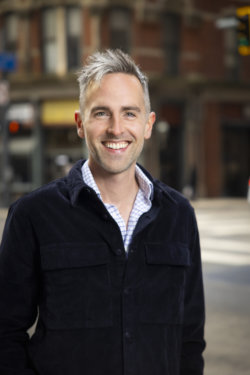 Ryan Rydzewski is a writer whose science and education reporting has garnered several awards and fellowships. A graduate of the University of Pittsburgh, he taught elementary school in south Louisiana before earning an MFA in nonfiction writing from Chatham University. As a freelancer, his magazine stories focus on everything from schools to space travel to Mister Rogers’ Neighborhood, and his poems and other pieces appear in several journals. A native of Erie, Pennsylvania, Ryan lives in Pittsburgh with his wife, Jacqueline.